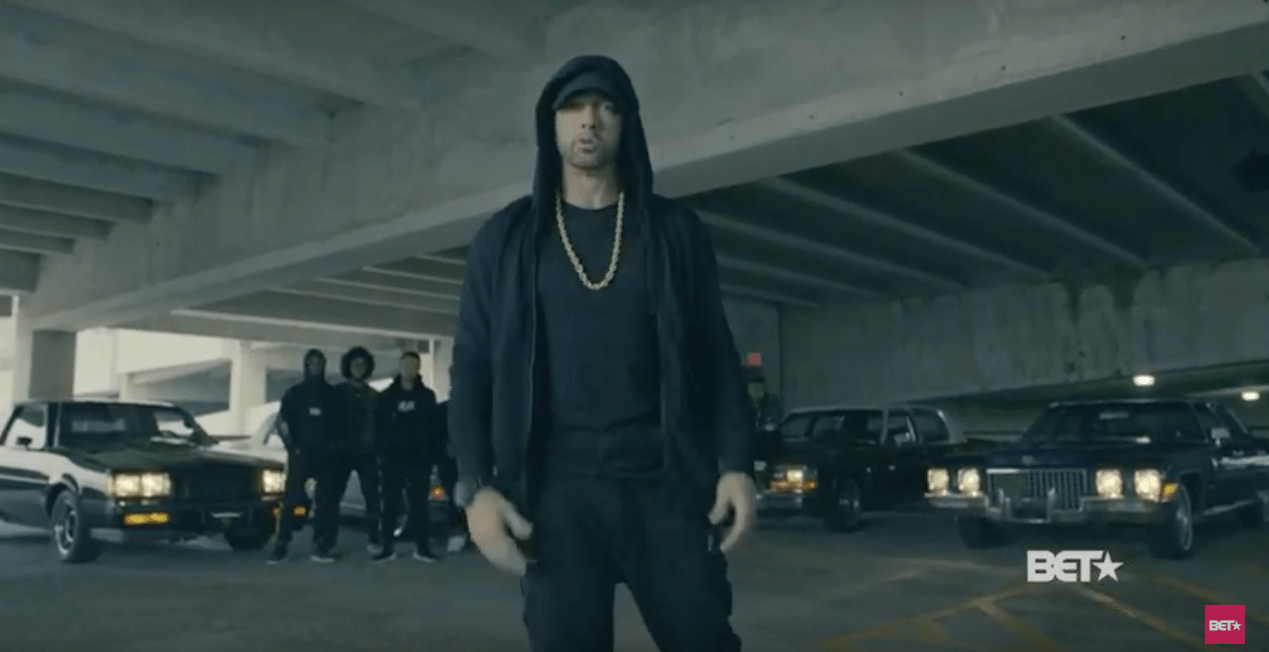 The 8 mile wordsmith is definitely back on his A game. Speaking directly to the President of the United States, Marshall Mathers, Aka Slim Shady, Aka Eminem let loose with a furious and poignant set of bars for The BET Hip hop awards.

Eminem Pointed out the 3 card marley tactics of the current president, with his slight of mind with and diversionary  tactics. Somehow he has managed to get the country focused on things like the whole taking a knee fiasco and turning it into something else.

The true nature of President Trumps agenda is finding itself on the front of newspapers every where. Coaches like Jerry Jones are  almost in the same vein as a slave owner, threatening  players with no game time if they refuse to stand for the  National Anthem.

Emeniem who struggled with his own demons over the last few years has taken a full and unapologetic stance with his convictions  on what and how  he feels about the President.

My feeling tho is if Emenim was black…. He would be murdered….. But what do I know? …… I’m just being petty.

Joyner Lucas is the reason for the last lackluster XXL cover

Joyner Lucas is the reason for the last lackluster XXL cover

In these fleeting times where the radio is saturated with literally “mumbo Jumbo” It’s  understandable why artists like Joyner Lucas have yet to grace the coveted cover of the XXL Freshman class. You see Joyner is actually saying something. His wordplay and narrative don’t fit the message of the establishment.

In this incredibly pictured piece, Joyner addresses the plight suffered by many minority youth who often find themselves emulating the “Hood heroes” but his  in his depiction however he stresses, “I don’t want to be like you. With artists garnering sponsorships from alcohol companies, unhealthy snack companies and everything detrimental  to a healthy upbringing it’s clear why an artist with such a grasp on reality is not in the forefront.

The radio has been plagued as of late with disturbing messages that you hear children humming and singing along to.  In recent years it was almost shocking to hear lyrics on terrestrial radio where a young girl claimed that her suitor had to be ready “to  eat the booty like groceries”.  Even in this past year the radio is rife with proclamations that procure death and dark fantasies. “All my friends are dead push me to the edge”, “molly percocet”  and very other rapper is ready to “shoot a nigga with a draco”.

There is no place like for  an artist like Joyner Lucas. His messages are too deep.  His dialogue reaches too far outward and creates too much of a thinking mindset. Young people are easier controlled when they are high out of their mind off of dope.  An artist like Joyner Lucas doesn’t do anything but force the hands of power into promoting foolery and idiocy . You see an artist like Joyner Lucas is a threat to stability of the infrastructure. I mean what would happen in minority neighborhoods if the children started listening to him nd started screaming at the top of their lungs to the drug dealers, and the shooters, ‘I don’t want to be like you?” What if the homecoming ( from prison) parties stopped and the people in minority community stopped celebrating negativity?  What if we demanded that our real leaders, the fathers, uncles, and big cousins stopped feeding into the bullshit and taught the next generation how to really win?  Until they ( The establishment) are ready to promote a different message we are set in the proverbial revolving door. In and out of bullshit.  Good looks Joyner, we need more artists like you…… but what do i know, I’m just being petty